I took these photos about a minute apart a few weeks ago....any gueeses what they are? "Click" to enlarge

Ron and Mia, don't give it away...we photographed them together. But please feel free to answer in a few days if no one else has. 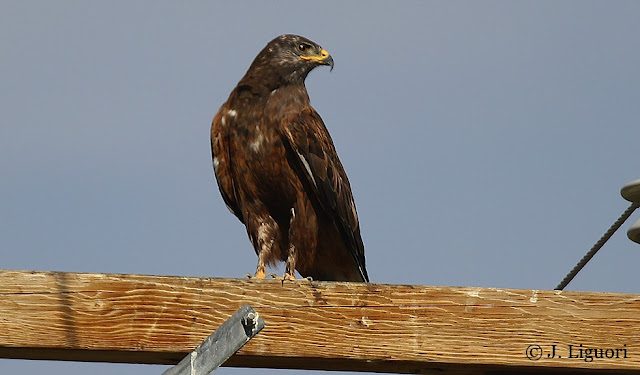 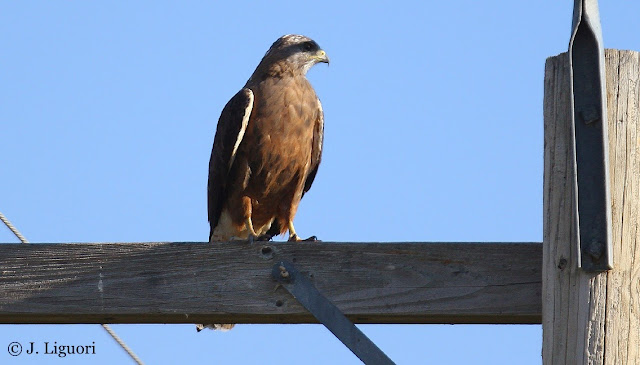 Throat patches on Sharpies and Cooper's

I don't often publish stuff in books or magazines that are difficult to see in the field or on birds in flight because minutiae type traits are often not helpful in these situations. But I do like talking about plumage traits and the blog is perfect for it. A friend mentioned something a while back that we had studied years ago, and the subject just came up today so I thought I'd share it. Many juvenile Cooper's Hawks have a pale throat with a stripe down the middle, while many juvenile Sharp-shinneds have a streaked throat. This throat thing is not a 100% diagnostic but is pretty reliable when used with other traits. Its just a secondary trait to take notice of, but nothing to rely on singularly. Anyway, check out the pics below ("click" to enlarge), the first 3 are Sharpies, the second 3 are Cooper's.

Also, it is more Common (especially in the West) for Coops to have streaky throats than for Sharpies to have a single throat line. The last two birds show these types... 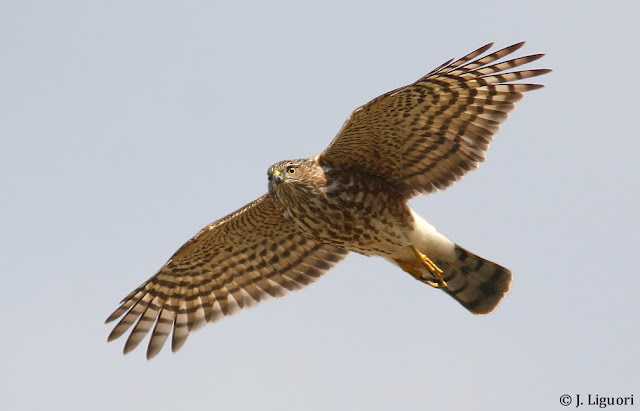 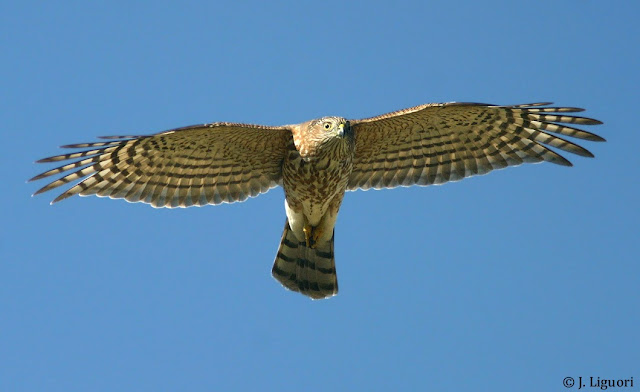 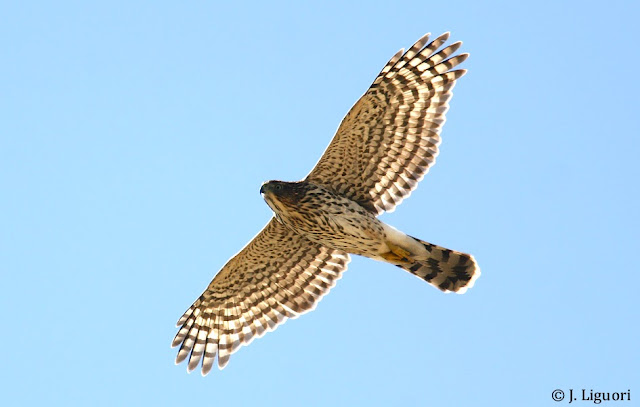 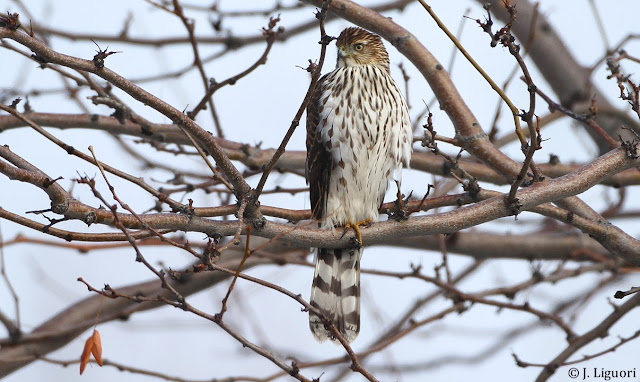 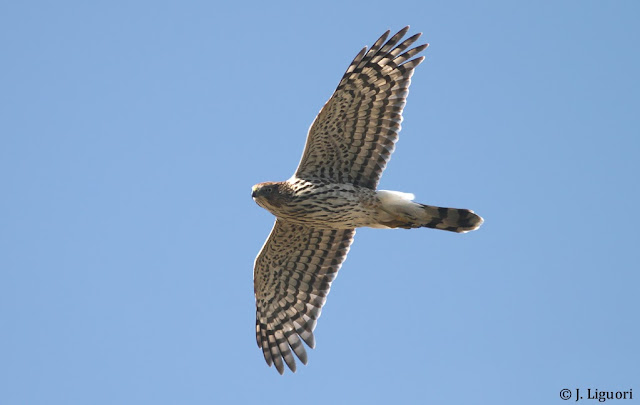 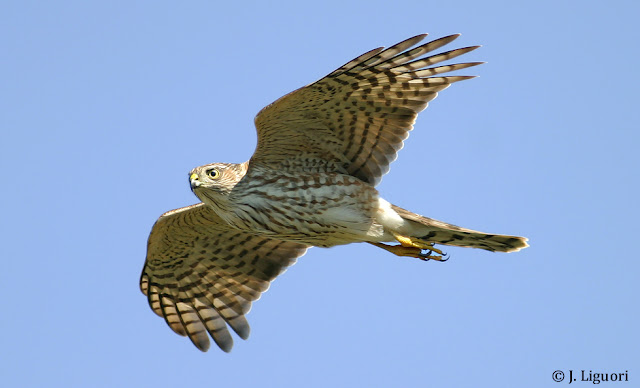 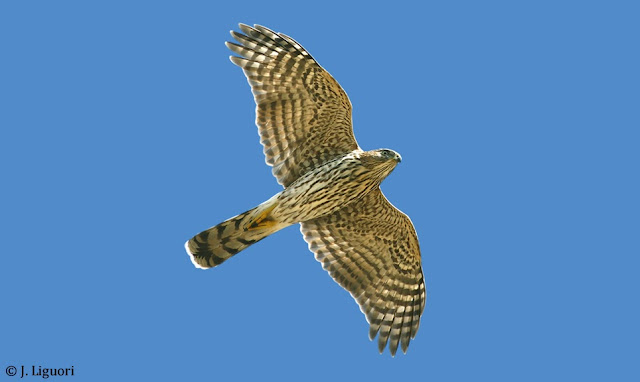 I was out with Mia and Ron a few weeks ago and we happened upon this dark adult Ferruginous Hawk. Dark Ferruginous are uncommon compared to light-morphs, but what I really wanted to point out is that most dark Ferruginous are rufous in color underneath like the first picture here. Young ones are usually darker rufous-brown than adults in color but still rarely appear black like the second photo. Another neat thing about Ferrug is that they often are either dark or light (bottom photo) even when the parents are one dark and one light-morph. A bird such as Red-tailed Hawk often shows a plumage in between dark and light when the parents are 2 separate morphs.

If anyone has photographed a black one, please share the pics with me via e-mail, and let me know if you'll allow me to post one here. 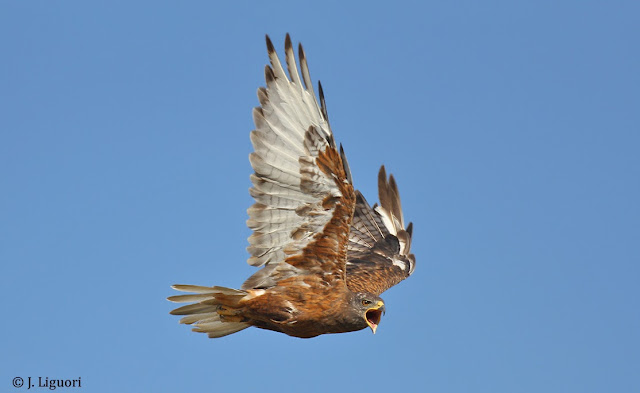 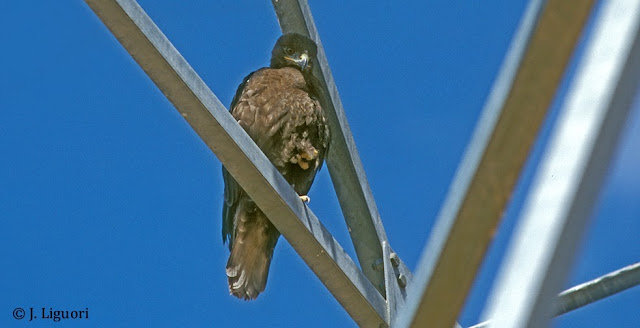 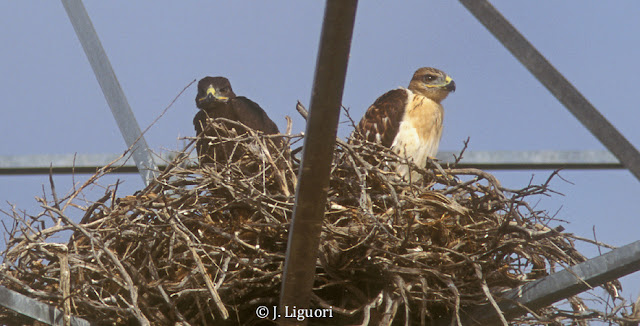 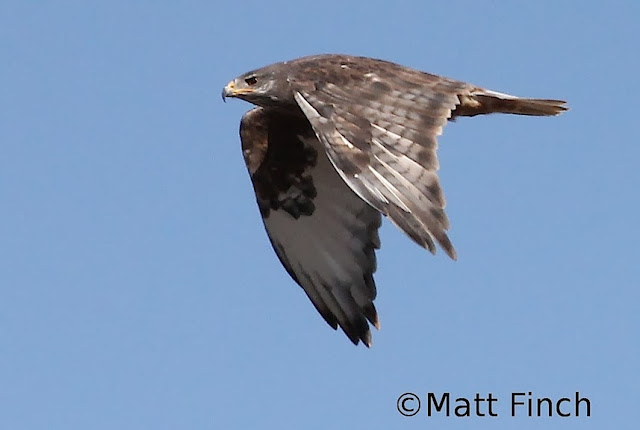 Hummingbird Shower, and a Note From the Field

This morning there were 2 hummingbirds hovering in the spray of my sprinkler. I realized they were showering! They would then sit on a nearby wire and preen, going back for a shower and back to preen several times. Has anyone else seen this? 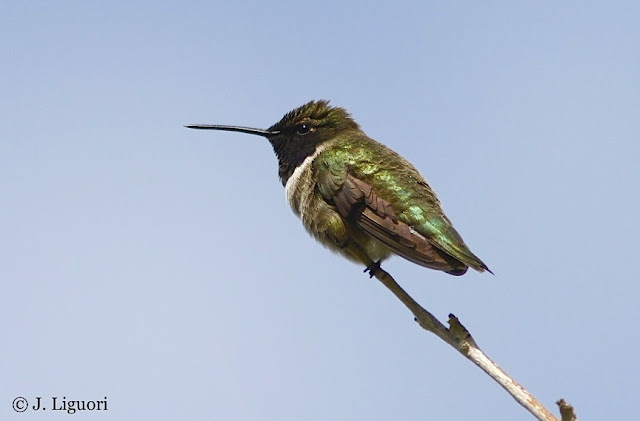 Another thing I wanted to mention: when I hike, I often run into lizards and snakes. I noticed that you can tell the difference between a 4-legged lizard and a snake by sound when you can't see them. The lizard runs away making near-constant "chicka - chicka - chicka" footsteps on the dry ground. Snakes slither so their sound is "crunchy" on the dry ground but constant - never interrupted. 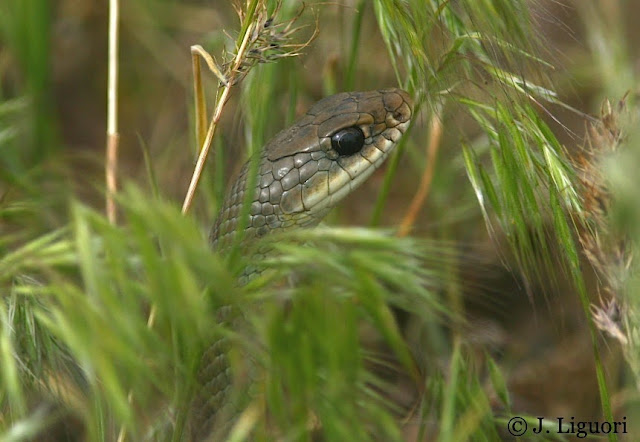 I asked Cathy Sheeter to write about the area she lives since it produces many interesting Red-tailed Hawks. Thanks for your time and photos Cathy! And check out her artwork and photography at <www.cathysheeter.com>

About eight months ago I moved from the city to rural Weld County, Colorado. Little did I know that I was moving to a hawk Mecca! While I have enjoyed nature photography for years and could identify hawks, I had little knowledge of subspecies. Then I met Steve Mlodinow, who introduced me to the concept of subspecies in birds, and Red-Tailed Hawks in particular. He then introduced me to Jerry, who also helps me fine-tune my observational skills.
When I first started looking, really looking at Red-Tailed Hawks around Weld County, I quickly found there were lots of Red-Tailed Hawks that didn’t seem to quite fit the mold for either pure Eastern (B. j. borealis) or pure Western (B. j. calurus). I was told that Easterns were uncommon in this part of Colorado, so I was perplexed to see nearly equal amounts of Eastern-looking (pale-breasted / white-throated) birds, typical Western birds, and in-betweeners. It seems that Weld County may be quite a zone for Eastern x Western intergrades. Of course, with the overlap in traits between the two subspecies it can be impossible to determine the exact parentage of many birds, but some birds seem to show clear traits of both. Undoubtedly, the most interesting birds seem to have some Krider’s traits along with Western traits! It seems that these two subspecies should not overlap in range, but we now know that they do.
I thank Jerry for his never-ending patience and feedback with the myriad of photos I send him of various odd hawks as I continue to try and document and learn about the Red-Tailed Hawks around me. Without his feedback I might still be in the dark about intergrade looking birds. Below are a few birds photographed in June and July 2013 in Colorado that seem to be intergrades. I hope you find them as interesting and intriguing as I do, and if you ever find yourself around this part of Colorado, take a close look at the Red-tails you might encounter.

Bird 1: At a glance, this adult might appear to be an Eastern with its white throat, faint bellyband, and pale scapulars, primaries, and head. But what of those rufous barred legs? Further support for some Western influence is found in the broad patagials, rufous barring to the underwings, and faint bands on the tail feathers.  Also, the upper tail coverts are a mixture of dark and light.

Bird 2: It’s hard NOT to notice this adult bird’s pale pink tail with thin sub-terminal band! This alone suggests Krider’s influence somewhere in the family tree. Additional support for Krider’s influence are pure white upper tail coverts and (noted by Jerry) rufousy upper wing coverts, hints of rufous in the primaries, and pale upperwings that exaggerate the banding in the primaries. Notice the minimal bellyband, but with Western type barring (and rufous tones). The patagial bars are broad, the head and throat are dark, but it has a pale supercilium.

Bird 3: This adult bird also has a notably pale pinkish tail suggesting some Krider’s influence, and mostly white uppertail coverts. The upperwing is slightly mottled whitish. The patagial bars are broad with rufous tones. While spotted on the belly in an Eastern fashion, there is barring on the underwing linings and suffusion of rufous to the chest. In addition, this bird shows very faint bands on the tail. I was surprised to see the new growth tail feather was bright and normal red. Jerry has photos of similar Krider’s types on the breeding grounds. I have seen this bird in the company of another lightly marked bird (inset). When perched together this bird’s body tone was noticeable paler, and the head was more worn with a pale supercilium and streaked throat.

Bird 4: This bird falls on the other side of the spectrum from bird 1. At a glance, it appears Western with moderately barred flanks, rufous tones to the chest, and multiple but faint tail bands. However, upon closer exam this bird shows unusually pale scapulars and primaries. The throat is very lightly streaked and the legs are almost pure white. The patagial bars are not particularly broad and the underwings are relatively unmarked.

Bird 5: If you see the topside of this bird first, you might assume it is a typical Western -- or if the underside is the first glimpse you get, how about a classic Harlan’s? This bird photographed in winter in Weld County appears to be a Harlan’s intergrade (likely with Western due to it being a darker bird). And that’s another neat thing about the location, the wintering hawks! 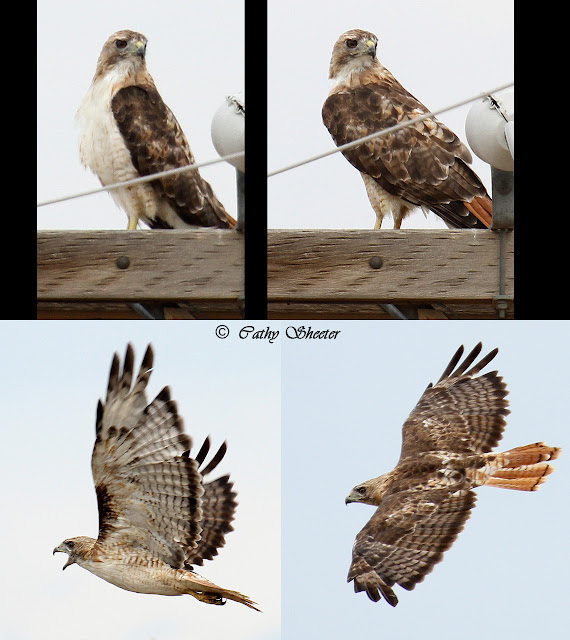 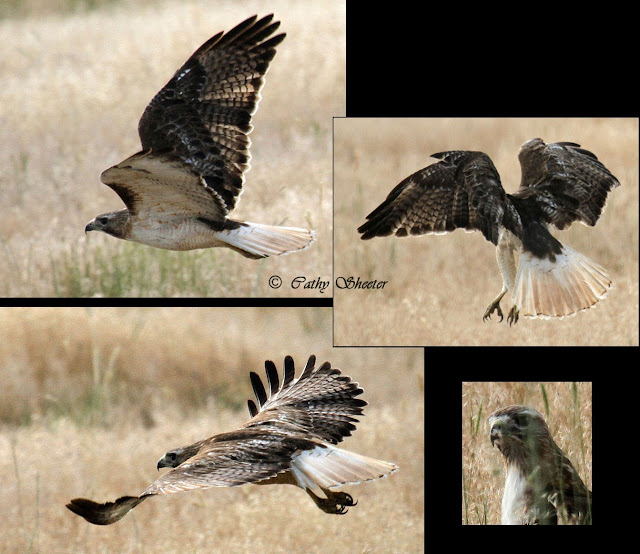 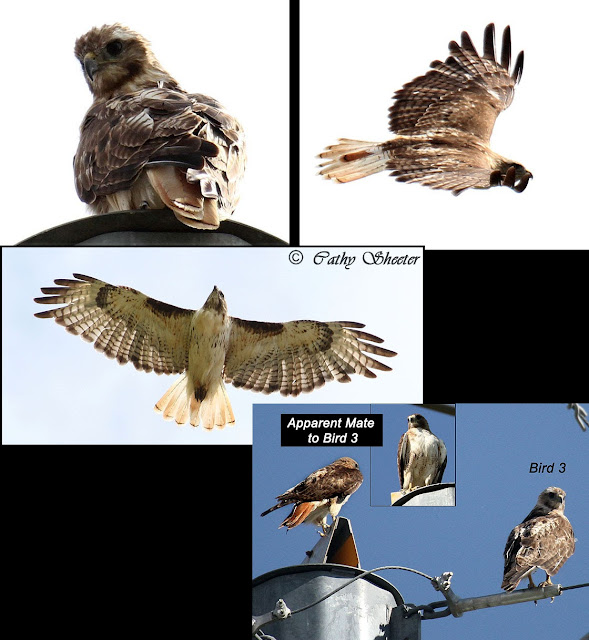 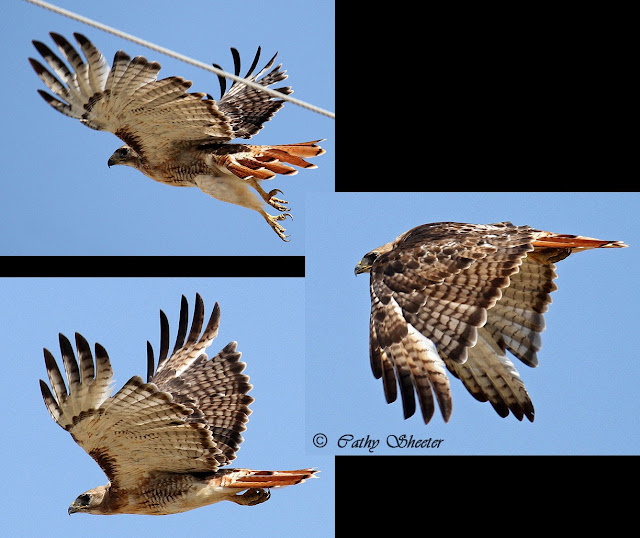 Check out the photo below ("click" to enlarge)...a juvenile Cooper's Hawk my friend Shyloh sent me. By the way Shyloh, your photos are fantastic! Anyway, notice how grayish the topside appears. Juveniles in fresh plumage often have a sheen on top and do not appear as brown as they "should", and for this reason they might be confused for adults if seen from above. Even during fall migration, some juveniles still lack significant fade or wear and appear "fresh". Of course the head lacks an adult pattern, but with only a quick glance, this mistake could and has been made. 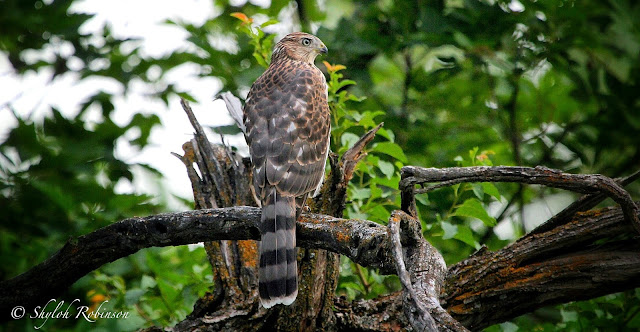 I got an e-mail the other day about why some birds look like they have dark areas in the flight feathers such as the Cooper's Hawk below (top bird). The person who asked knew the answer but I thought I'd just show it anyway. Just so happens when birds are backlit the overlapping feathers can show up as dark areas, it has nothing to do with molt or anything else.

Also, light can effect other things too. Check out these 2 juvenile Red-tails…sometimes the translucent primary "windows" don't show up in flight. AND, sometimes adults show translucence for certain reasons, now those are tricky. If possible, always ID or age birds by more than a single trait alone, I can't stress that enough!!!!! Hope this helps. 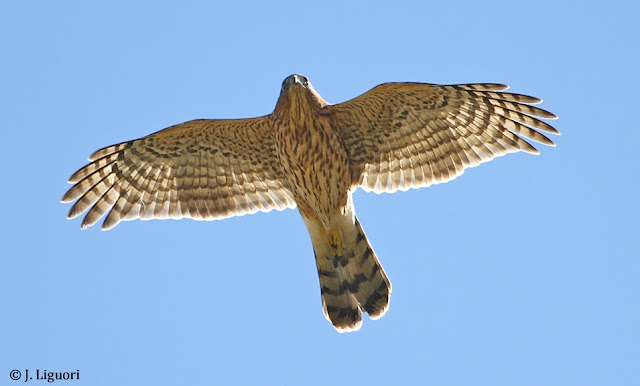 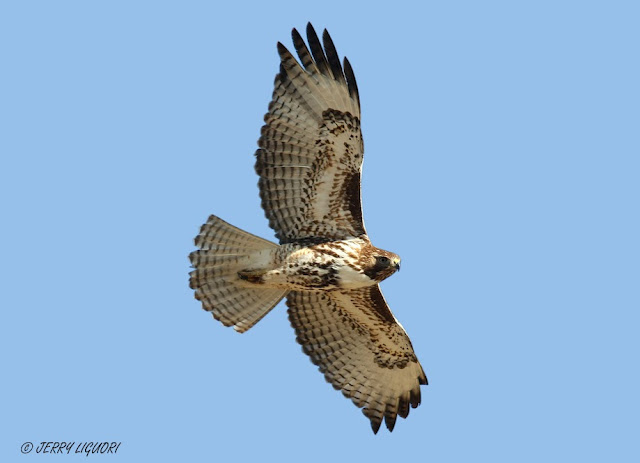 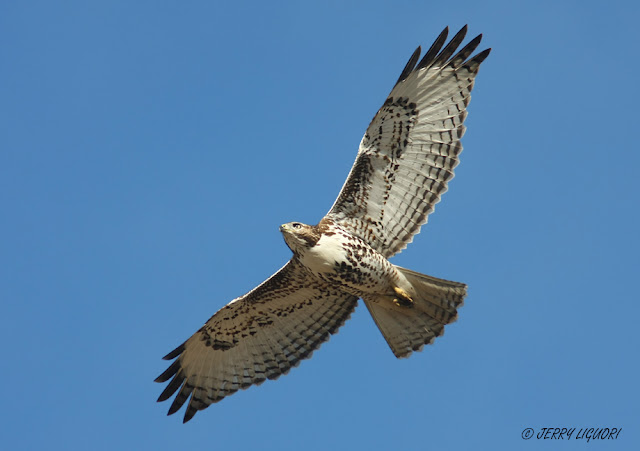 Cathy Sheeter sent me these photos with the title "Silver Swainson's", and I was curious what that meant. Cathy has a knack for finding interesting birds (and wrote a blog about it I'll post soon). So, when I scrolled down to see this hawk, I was stunned by its beauty, and intrigued by its lack of pigment. I have not seen a Swainson's Hawk like this before (not sure anyone has), nor a hawk of any type with this odd coloration. Does anyone want to comment on the bird? The white face is beautiful, as is the gray body and leggings. Some might suggest a hybrid, and if so, let me know with what and why, it would be interesting to hear. Sorta has a Mississippi Kite feel but that highly unlikely hybrid can't really be justified. And to be clear, I don't think it is a hybrid, but fun to ponder 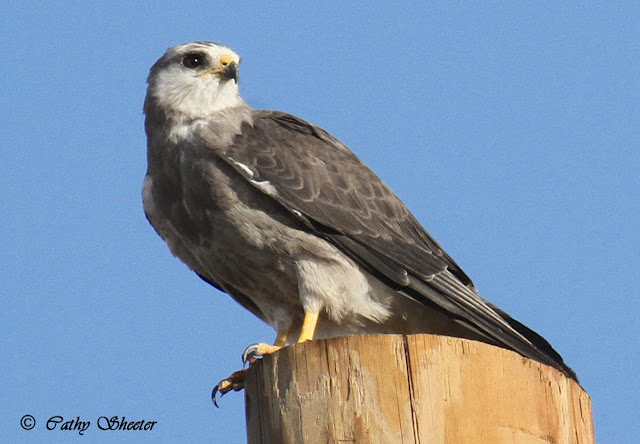 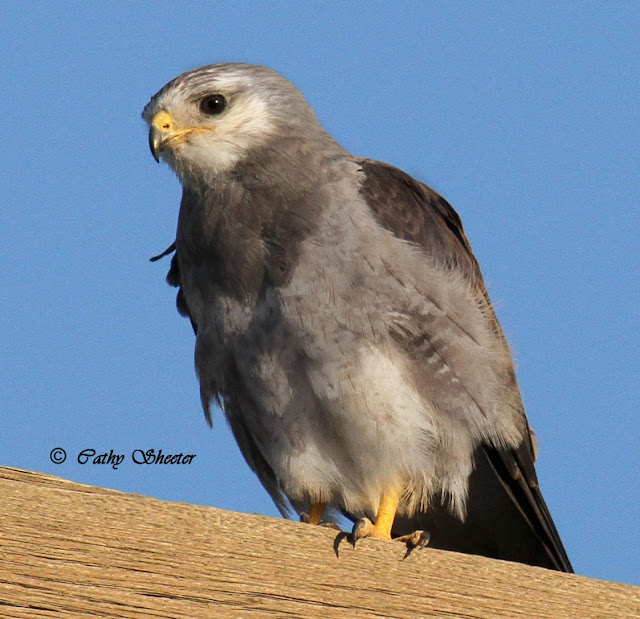 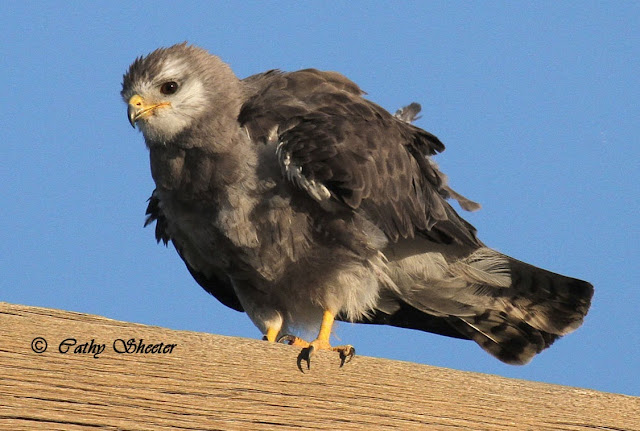 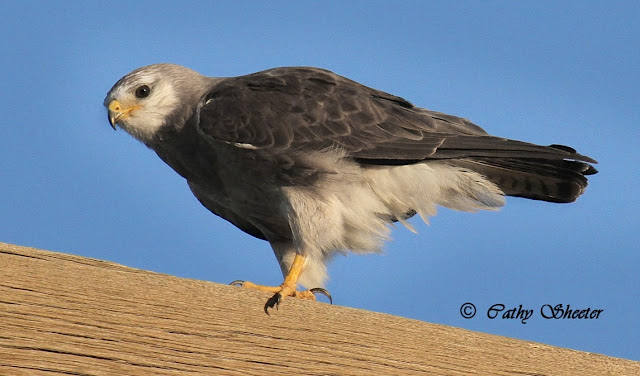 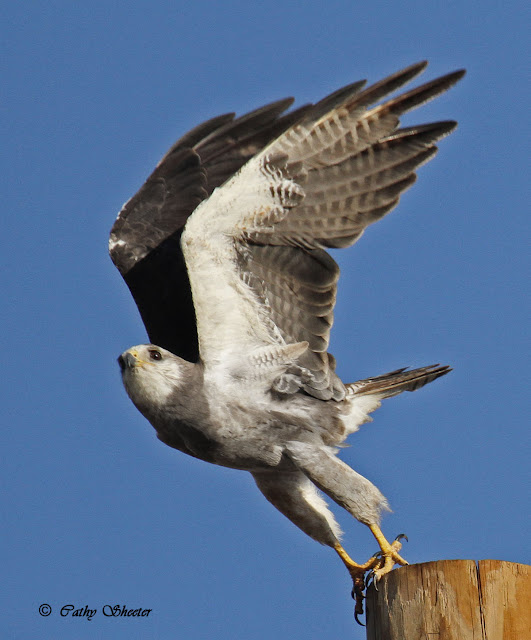 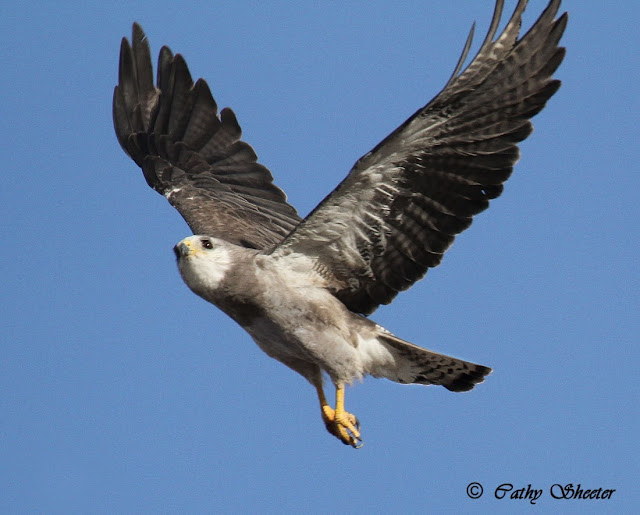