Looking at molt patterns on birds in flight can be very difficult to impossible to assess correctly (even photos can be misleading). I just spent the last 2 weeks looking at Bald Eagles on migration (among other birds), and discussing how to age them in flight with a number of birders. Let me say this up front -- knowing what to look for from each angle is far more important than anything else when ageing Bald and Golden Eagles!!!!! If you learn anything from this blog, I hope it is that. Not only that, but knowing what can't be done in the field is equally important. For example, an all dark Golden Eagle gliding overhead with its tail folded (closed) CANNOT BE AGED with certainty. Look at "Hawks From Every Angle" pg. 123 Figure GE 04. There is a reason I put that plate in the book, it is to show that the tail needs to be fully fanned to see if there are white based feathers or not. Golden Eagles with 1 to 4 retained sub-adult tail feathers are almost always impossible to age from below when the tail is folded. It is simply not possible to see the retained white-based feathers! So, uniformly dark Golden Eagles in these situations are "unknown age." Its silly to fret over saying "I don't know", it only means that you are aware or have the expertise to know better. Now, yes…it is possible to age all-dark Golden Eagles from below in some cases, especially if they are the rare-plumaged all-dark juvenile.

I got off subject a bit, but my original thought is this: look at the Bald Eagle image below ("click" to enlarge). It is the same bird in 2 different poses. In the first image, you cannot see that there are shorter inner secondaries. But in the second image with the wings spread, it is obvious. I bet some people would call the first image a juvenile based on the dark belly and what appears to be a lack of molt, but we know it to be a 2nd-year based on the image on the right. My point being, know what to look for in the field when molt is not visible, especially on birds such as this when the plumage is not the norm (and yes, brown-bellied 2nd-years are uncommon, but do fly by). Most times, 2nd-year birds are the whitest-bellied of all the ages (and that is important to know in itself). Note the very faded belly with minimal white patches, white on the crown, a yellow base to the bill, and the dark tips to the inner primaries. Hey, if you can see molt in the wings or tail great, but if not….learn what to look for otherwise. Learning the applicable field marks on flighted birds is one of the keys to accurate ID!

I hate when birds are so close they don't even fit in the frame of the camera, but I love a close encounter no less. Are pictures like this with the wings cut off worth saving? I used to delete all pics like this (click to enlarge), but now I think they are at least worth saving....any thoughts? 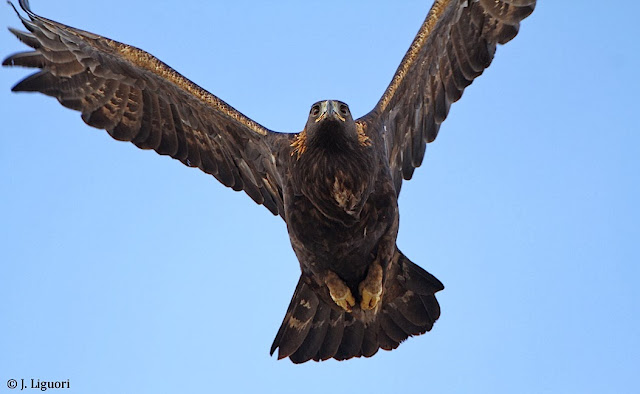 A recent discussion has come up about birds appearing unusually pointed-winged (first link below). The bird in question was a juvenile Sharp-shinned Hawk that looks Merlin-like as it is headed away in the photo. This is defnitely the case with many raptors that are not associated with showing pointed wings, but often do in certain postures or angles. I have shown this in other posts (2nd link below) and in my books but just wanted to mention it since it is a common ID issue. Coincidentally, I just had a discussion on this very subject the other day at a hawkwatch as an adult male Sharp-shinned was mistaken for a Merlin by a very keen observer.

Take a look at the B&W silhouettes of Sharp-shinned Hawks (1st photo) that all appear pointed winged (and Merlin-like) either headed away or head-on. The 2nd photo shows birds in color for extra viewing, and the 3rd image is a collage of Merlins showing plumages (which is important for separating the 2 species when they appear similarly shaped). The Sharp-shinned in question has streaks that end at the belly and lack the broadness or heaviness of a Merlin streaking. Also, the underside is pure white, whereas Merlins in fall are buffy in tone. Merlins also almost always have some type of streaking on the undertail (bold or faint), whereas Sharp-shinned almost never does. The underwing linings of Merlin are checkered not streaked like Sharp-shinned and the banding to the secondaries and primaries is bolder and shows a more spotted look than the evenly banded look of Sharp-shinned. One last thing, Merlins show a broad white tail tip and obvious multiple tail bands that is not shown on the bird in question. I hope this helps because my only goal is to attempt to teach or share my view.


A comment on shape too...Sharp-shinned Hawks are stockier winged than Merlins in all postures and lack the long-handed look of Merlin. 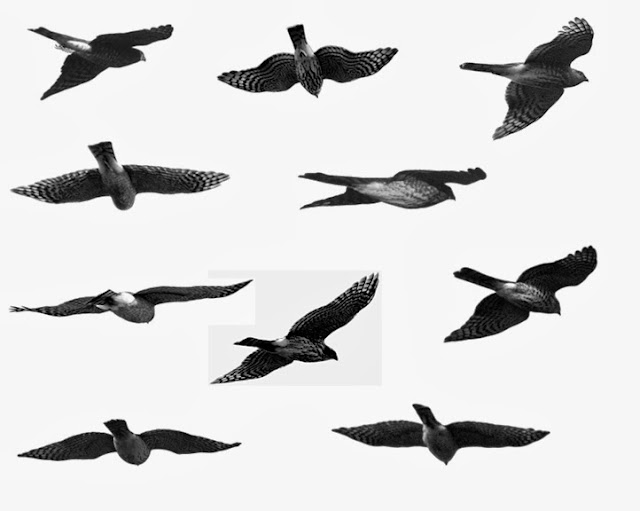 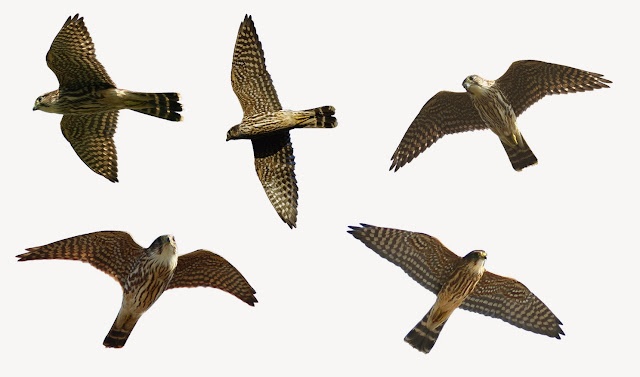 It has been said that juvenile male Harriers have paler underwing coverts than juvenile females. This is not really true, there is considerable overlap, and sexing juvenile Harriers based on plumage is inaccurate at best. The eye color does differ in juveniles (males yellowish, females brown), but that is almost impossible to see in flight. And, shape and flight style of males and females differs slightly but it takes lots of practice to be comfortable noticing this. Females are of course larger, but this is really only noticeable with a direct comparison. The best way to sex juvenile Harriers in the field is NOT TO! Check out these birds below (shown small for a reason), would you feel comfortable telling the sex of any? 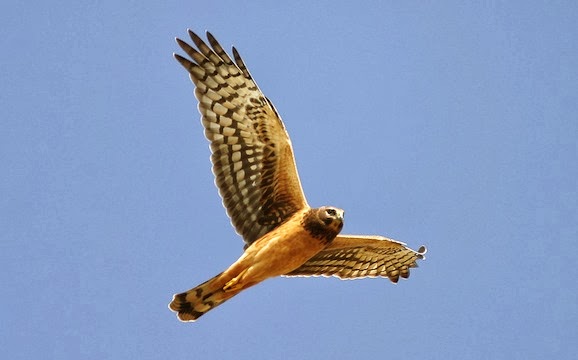 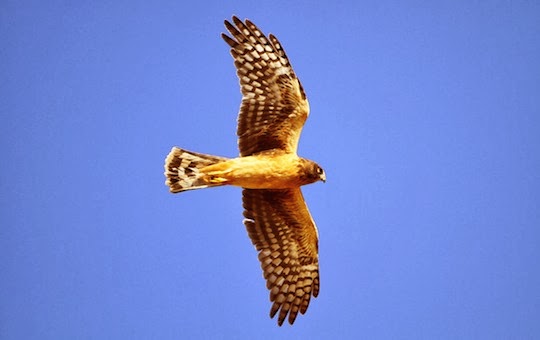 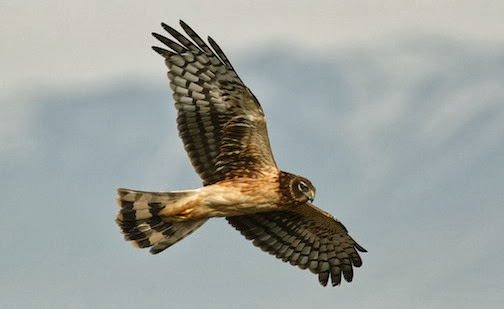 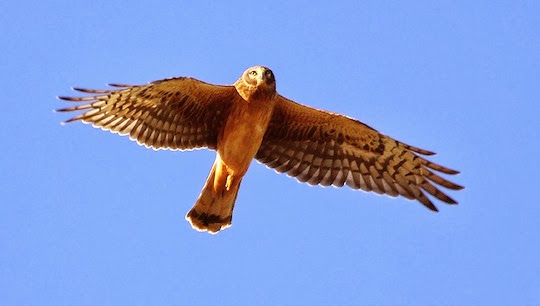 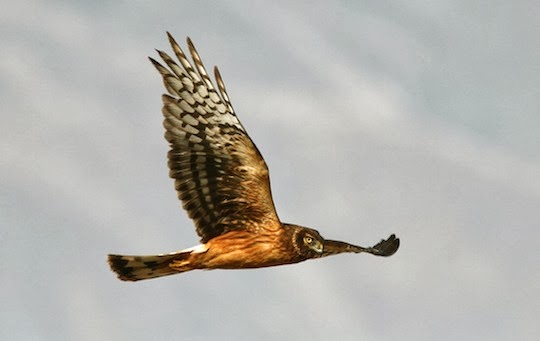 Let me touch on a subject that has been published already and I think is fairly well-known. Juvenile male Kestrels molt their body feathers in their first fall (often on migration). This is unlike other raptors, making them tricky to age in flight. To start, juveniles have whitish chests with black streaks, but can be seen in different stages of body molt until they acquire a complete adult orange breast by late fall. Some birds molt quicker than others, as is true for all raptors. Often, it is possible for bird banders to age male Kestrels during fall migration, but toward the end of fall, it can be difficult. And, of course, and Kestrel molting flight feathers in fall is an adult. Also, bird banders can look to see if fault bars are present in the wings or tail, but this is impossible to see in flight.

Check out these photos below ("click" to enlarge) and see if you can age them... 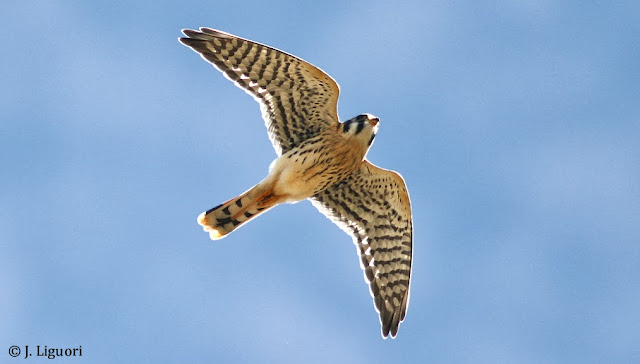 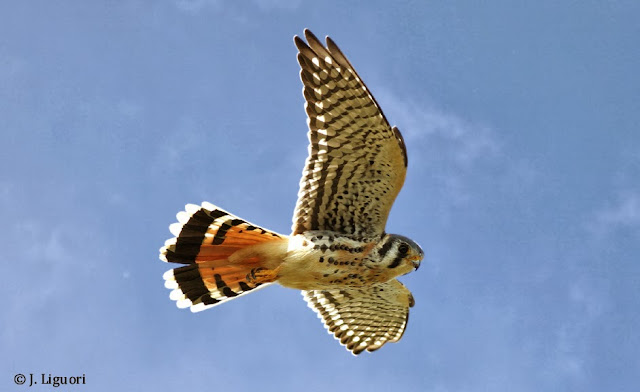 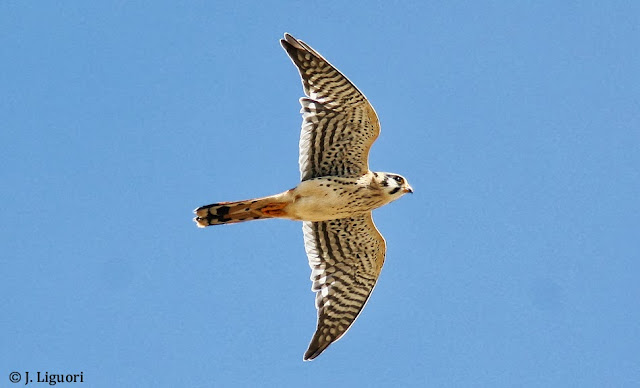 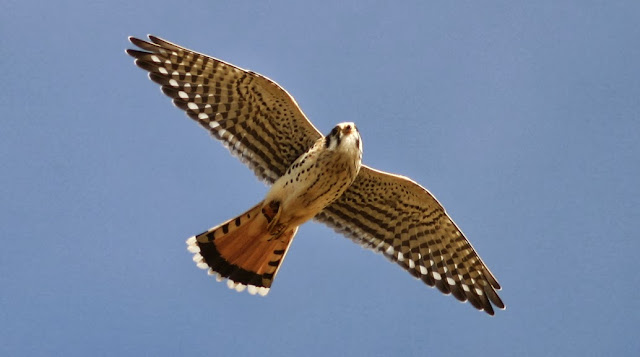 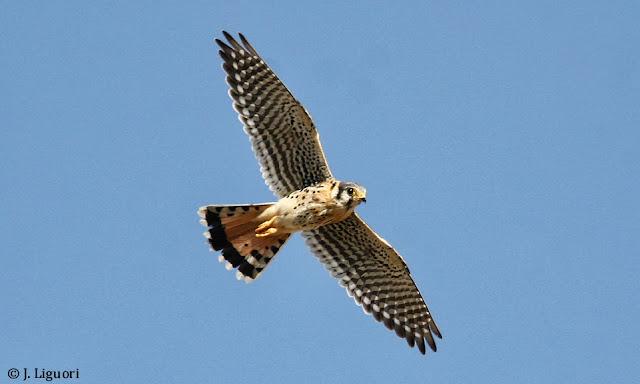 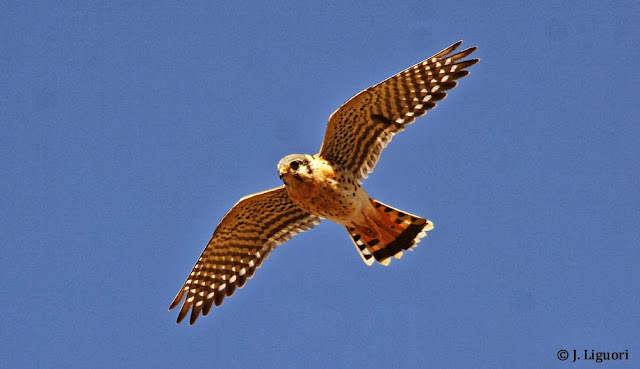 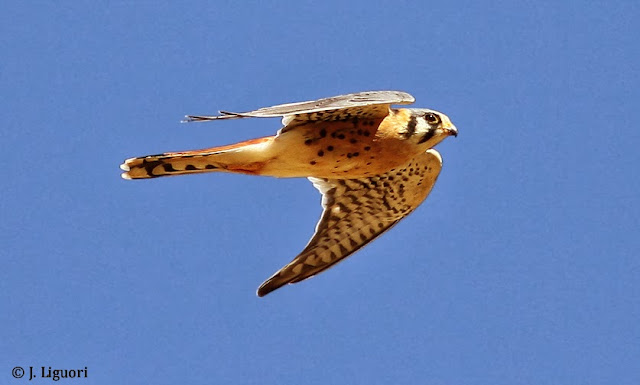 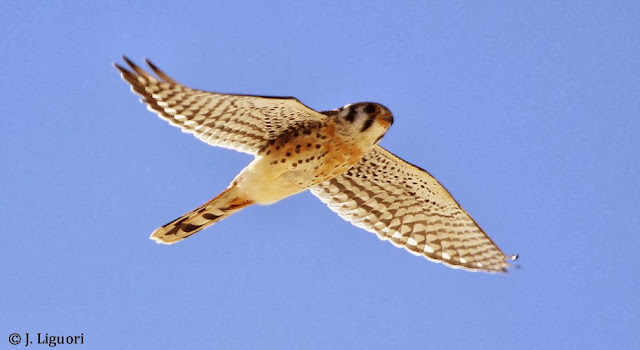 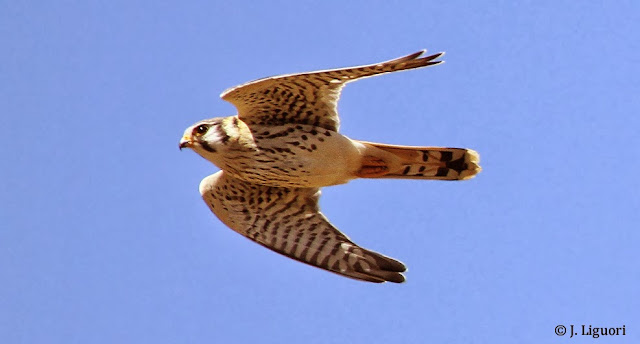 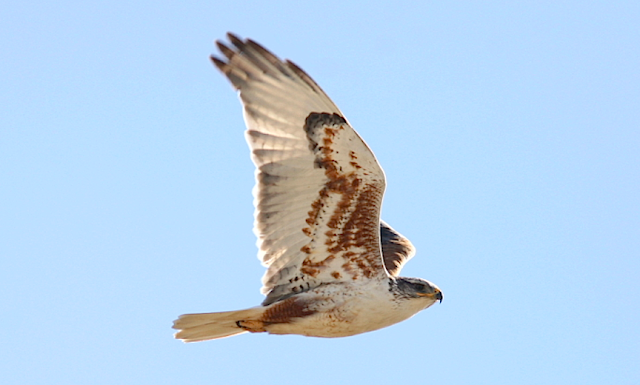 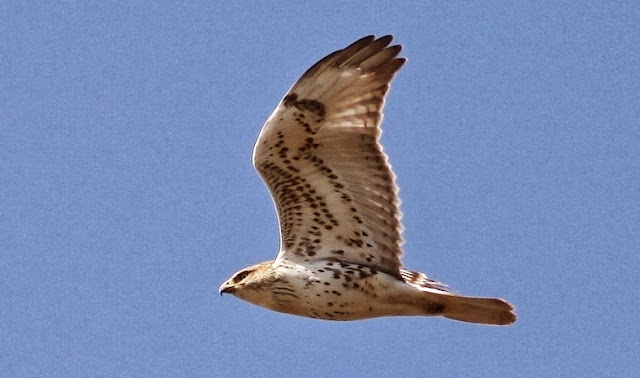 A few discussions came up about hawk ID this past week. One in particular was ageing Bald Eagles to a specific year. Let me stress that LOOKING AT PHOTOS IS VERY DIFFERENT THAN LOOKING AT BIRDS IN THE FIELD! I have said this before, and it is extremely important to realize this in making accurate ID's. There are many traits that can be seen in close-up photos that are often 'invisible' in the field. So, knowing what to key in at first glance for birds in flight may be different than what to look for in a photo. Knowing this is half the trick!

Most birders know how to tell 1st-year (juvenile) Bald Eagles, but some 3rd and 4th-year Bald Eagles (and some 2nd-years) appear dark-bellied and dark headed in the sky and can be tricky to tell from 1st-years. So, what do you look for on dark-bellied Bald Eagles overhead? One of the neatest things to look for are the "translucent" tips of the inner primaries that appear as if 1st-year birds are missing feathers. Older birds may have white on the inner primaries, but the tips of the feather are black, so the wings lack the "missing feather" look of 1st-years.

Also, when 1st-year birds bank in the distance and reveal the upperside, the overall tone to the topside is helpful. Of course most 2nd and 3rd-year birds have a white patch on the upper back, but many 3rd and especially 4th-year birds lack an obvious white patch. However, they also lack the two-toned upperside (evenly brown upperwing coverts contrasting the blackish flight feathers - that becomes very obvious by winter) that 1st-year birds show, instead having a darker overall topside. 2nd, 3rd, and especially 4th-year Bald Eagles may show faint to obvious white on the top of the head, juveniles always show dark heads (but some have white on the throat).

Check out these 1st-year birds on top (and bottom right - upperside photo) compared to the 3rd-year birds on the bottom. And remember, of course no field mark is 100% accurate, there are exceptions to every rule!