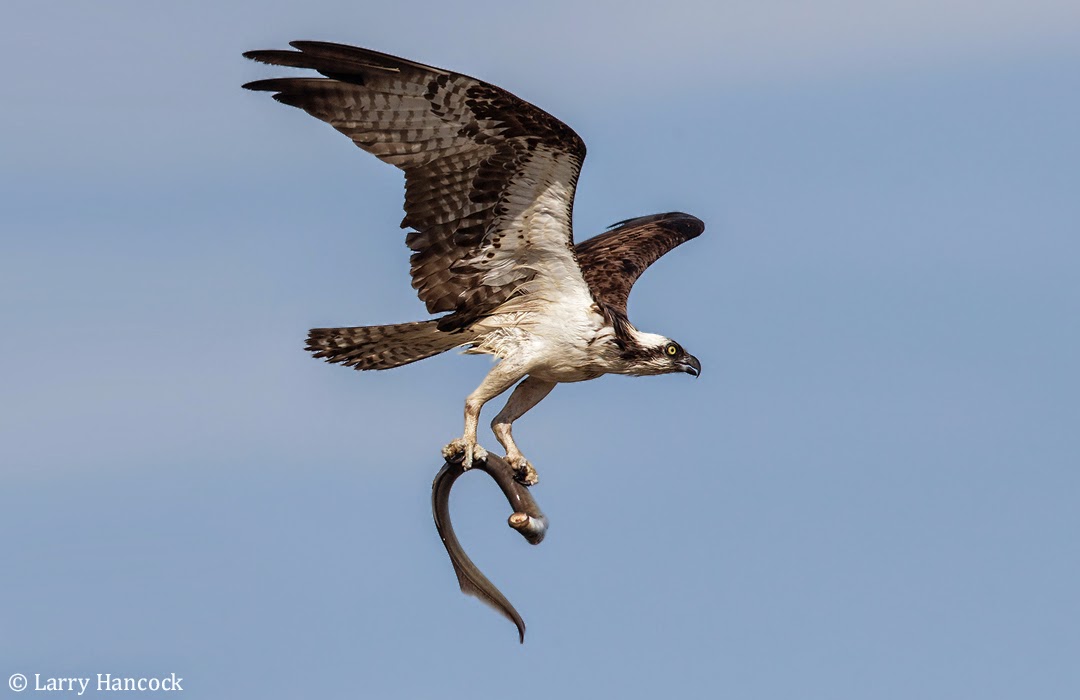 My friend Larry just sent me a photo of an Osprey from Oregon carrying an eel, and it reminded me of a story from late September, 1994. I was the hawk counter at Cape May Point, NJ just going about my business trying to count birds as best I could. But late September is the time when the visitation at Cape May is "off the charts" and the hawk watching platform is packed with people...not to mention the ground surrounding the platform too. In fact, one busy day I counted 1,100 people at the hawk watch! When there is a large group of people watching birds together, it is inevitable that some people will try to stand out from the crowd, or there is bound to be animated discussions regarding bird identification. I don't mean that in a negative way, nothing makes me happier than watching hawks, it's just human nature to compete and I've seen it way too often to know otherwise.

Anyway, the entire weekend, one gentleman was trying to best me (correct me, out-call me, one-up me --whatever you want to call it) and no matter what, he wasn't going to leave my side until he did. It's not my cup of tea to do "battle" at a hawk watch, but I guess it comes with the territory of being an official hawk counter. By sunday afternoon, falcons, accipiters, Broad-winged Hawks, and Ospreys were passing over by the hundreds and I noticed one of the Ospreys was "packing a lunch" and lunch was an eel. I called out that there was an Osprey flying down the beach with a fish in its talons. Right on cue, the guy who was waiting for me to flub something realized his chance to correct me and screamed out "that's not a fish, that's an eel!" And no sooner did he get the words out, a friend of mine, Bob Abrams, replied loudly "eels are fish." The guy was a bit embarrassed, but it actually broke the tension between us, and we watched hawks together for the remainder of the day minus the score keeping.

I guess the moral to the story is: if you are going to correct someone, you BETTER be right. More and more on the internet, bird ID discussions are becoming contentious -- I find it silly to argue over a bird. The truth is, people are allowed to call a bird whatever they want, don't have to agree with you for whatever reason they choose, and are certainly allowed to innocently misidentify a bird without being humiliated for it! Let me know if these type of posts bore you or not....I had fun writing it.